Adventures in Missing the Point 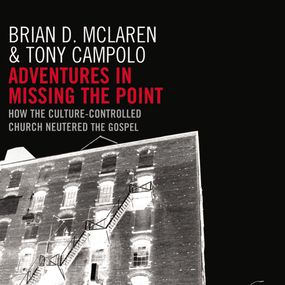 Adventures in Missing the Point

Title: Adventures in Missing the Point

If you’re brave enough to take an honest look at the issues facing the culture–controlled church–and the issues in your own life–read on. Do you ever look at how the Christian faith is being lived out in the new millennium and wonder if we’re not doing what we’re supposed to be doing? That we still haven’t quite “gotten it”? That we’ve missed the point regarding many important issues? It’s understandable if we’ve relied on what we’ve been told to believe or what’s widely accepted by the Christian community. But if we truly turned a constructive, critical eye toward our beliefs and vigorously questioned them and their origins, where would we find ourselves? Best-selling authors Brian McLaren and Tony Campolo invite you to do just that. Join them on an adventure–one that’s about uncovering and naming faulty conclusions, suppositions, and assumptions about the Christian faith. In Adventures in Missing the Point, the authors take turns addressing how we’ve missed the point on crucial topics such as: Salvation, The Bible, Being Postmodern, Worship, Homosexuality, Truth, and many more…