Lost World of the Israelite Conquest: Covenant, Retribution, and the Fate of the Canaanites - Olive Tree Bible Software

Start Smart in 2022 With Huge Savings!

Lost World of the Israelite Conquest: Covenant, Retribution, and the Fate of the Canaanites 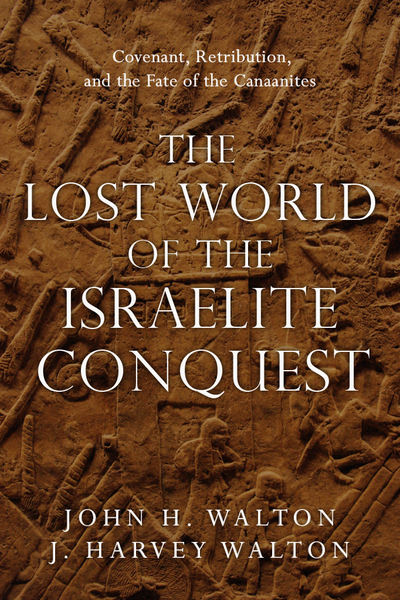 Lost World of the Israelite Conquest: Covenant, Retribution, and the Fate of the Canaanites

Title: Lost World of the Israelite Conquest: Covenant, Retribution, and the Fate of the Canaanites

Holy warfare is the festering wound on the conscience of Bible-believing Christians. Of all the problems the Old Testament poses for our modern age, this is the one we want to avoid in mixed company.

But do the so-called holy war texts of the Old Testament portray a divinely inspired genocide? Did Israel slaughter Canaanites at God's command? Were they enforcing divine retribution on an unholy people? These texts shock us. And we turn the page. But have we rightly understood them?

In The Lost World of the Israelite Conquest, John Walton and J. Harvey Walton take us on an archaeological dig, excavating the layers of translation and interpretation that over time have encrusted these texts and our perceptions. What happens when we take new approaches, frame new questions? When we weigh again their language and rhetoric? Were the Canaanites punished for sinning against the covenanting God? Does the Hebrew word herem mean "devote to destruction"? How are the Canaanites portrayed and why? And what happens when we backlight these texts with their ancient context?

The Lost World of the Israelite Conquest keenly recalibrates our perception and reframes our questions. While not attempting to provide all the answers, it offers surprising new insights and clears the ground for further understanding.

This volume can be purchased individually, or as part of The Lost World Series (6 Vols.).

"The conquest of Canaan is arguably the most intractable ethical problem in the Bible, and to date no solution has garnered a consensus. These authors offer a genuinely fresh approach to mitigate the difficulties. Deeply rooted in ancient Near Eastern mores and reconsideration of key biblical words and texts, the arguments challenge many commonly held ideas. While provocative at times, this book deserves careful consideration." - John W. Hilber, professor of Old Testament, Grand Rapids Theological Seminary

"The violence in the book of Joshua has long vexed devoted Bible readers. The father and son authors of this fine volume offer a fresh, more pacific reading of the book in light of what they deem to be relevant ancient Near Eastern parallels. They present their case in a series of propositions that rebut inadequate (in their view) modern solutions and support their alternative view with impressive close rereadings of biblical and extrabiblical texts and illuminating Hebrew word studies. They argue, for example, that the Hebrew verb herem means 'to remove from use,' not 'to annihilate,' and that its application to human communities 'is intended to destroy identity, not to kill people.' Indeed, ancient cultural ideas of order (versus disorder), identity (not ethnicity), and the suzerain-vassal model of what the authors call 'covenant order' drive their argument. Ultimately, they demonstrate that to read the Bible from an ancient (versus modern) perspective may yield a clearer, less distorted understanding of its controversial topics. They have proffered a commendable, thorough, thought-provoking rethinking of violence in Joshua and its implications for Christian identity today." - Robert L. Hubbard Jr., professor emeritus of biblical literature, North Park Theological Seminary John H. Walton (PhD, Hebrew Union College) is professor of Old Testament at Wheaton College and Graduate School. Previously he was professor of Old Testament at Moody Bible Institute in Chicago for twenty years.

J. Harvey Walton (MA, Wheaton College Graduate School) is a researcher in biblical studies and has contributed to a variety of publications. He is pursuing graduate studies at St. Andrews University.