Return to Rome: Confessions of an Evangelical Catholic 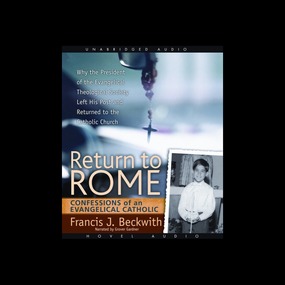 Return to Rome: Confessions of an Evangelical Catholic

Title: Return to Rome: Confessions of an Evangelical Catholic

A high profile former Evangelical Theological Society president tells the provocative story of his return to the Catholic church and explains how he still considers himself evangelical. What does it mean to be evangelical? What does it mean to be Catholic? Can one consider oneself both simultaneously? Francis Beckwith has wrestled with these questions personally and professionally. He was baptized a Catholic, but his faith journey led him to Protestant evangelicalism. He became a philosophy professor at Baylor University and president of the Evangelical Theological Society (ETS). And then, in 2007, after much prayer, counsel, and consideration, Beckwith decided to return to the Catholic church and step down as ETS president. This provocative book details Beckwith's journey, focusing on his internal dialogue between the Protestant theology he embraced for most of his adult life and Catholicism.
ISBN: 9781596446854