Tap Code: The Epic Survival Tale of a Vietnam POW and the Secret Code That Changed Everything - Olive Tree Bible Software

Tap Code: The Epic Survival Tale of a Vietnam POW and the Secret Code That Changed Everything 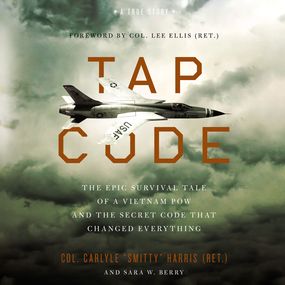 Tap Code: The Epic Survival Tale of a Vietnam POW and the Secret Code That Changed Everything

Title: Tap Code: The Epic Survival Tale of a Vietnam POW and the Secret Code That Changed Everything

Discover never-before-told details of POW underground operations during the Vietnam War told through one airman's inspiring story of true love, honor, and courage.

Air Force pilot Captain Carlyle "Smitty" Harris was shot down over Vietnam on April 4, 1965 and taken to the infamous Hoa Lo prison--nicknamed the "Hanoi Hilton." For the next eight years, Smitty and hundreds of other American POWs--including John McCain and George "Bud" Day--suffered torture, solitary confinement, and unimaginable abuse.

It was there that Smitty covertly taught many other POWs the Tap Code--an old, long-unused method of communication from World War II. Using the code, they could softly tap messages of encouragement to lonely neighbors and pass along resistance policies from their leaders. The code quickly became a lifeline during their internment. It helped the prisoners boost morale, stay unified, communicate the chain of command, and prevail over a brutal enemy.

Meanwhile, back home in the United States, Harris's wife, Louise, raised their three children alone, unsure of her husband's fate for seven long years. One of the first POW wives of the Vietnam War, she became a role model for other military wives by advocating for herself and her children in her husband's absence.

Told through both Smitty's and Louise's voices, Tap Code shares the riveting true story of:

"Tap Code is an incredible story about two American heroes. Col. "Smitty" Harris and his wife, Louise, epitomize the definition of commitment--to God, to country, and to family. This tale of extreme perseverance will restore your faith in the human spirit."

"The incomprehensibly long ordeal of the Harris family is agonizing. Their love, faith, loyalty, and courage epitomize all that is good about America."