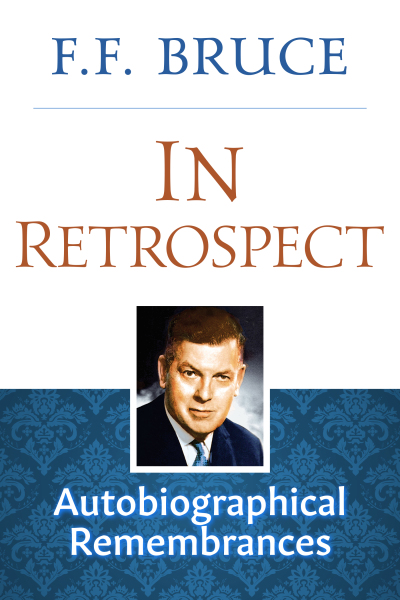 In Retrospect: Remembrances of Things Past is an intimate self-portrait of the life and times of F.F. Bruce, one of the evangelical world’s most beloved and influential biblical scholars.

In a time when the academic community looked down upon Evangelicals, Bruce significantly demonstrated that worthwhile academic work could be done by an Evangelical. At the same time, he persuaded Evangelicals that they should not turn their backs on academic methods of Bible study, even if the results might differ from traditional evangelical views.

F.F. Bruce’s accomplishments were astounding. He was head of the Department of Biblical History and Literature at the University of Sheffield and Rylands Professor of Biblical Criticism and Exegesis at the University of Manchester. He was president of societies for both the study of the Old Testament and the study of the New Testament. Professor Bruce authored more than fifty books and nearly 2,000 articles and reviews. Christianity Today named his New Testament Documents: Are They Reliable? one of the top 50 books that had shaped evangelicals. His commentaries on the Acts of the Apostles and Hebrews are considered to be classics. He was editor of The Evangelical Quarterly and the Palestine Exploration Quarterly.

In Retrospect paints a memorable picture of F.F. Bruce’s childhood in northern Scotland, his academic training at Aberdeen, Cambridge, and Vienna, and his career. His amazing memory is demonstrated in the book’s details; his delightful sense of humor in its stories of friends, and acquaintances; his equanimity in its accounts of academia and evangelicalism; and his spiritual heritage as one of the Brethren, a network of local assemblies. His modesty and reserve also come through in that he tells less than many readers would like to know about his own spiritual experience and his family life. F.F. Bruce was a blessed man with a satisfied mind.

"Once I started reading, I could not put the book down. Here is a book that will warm your heart, enlighten your mind and call you to faithfulness to Jesus and his church," said David Ewert in Direction.