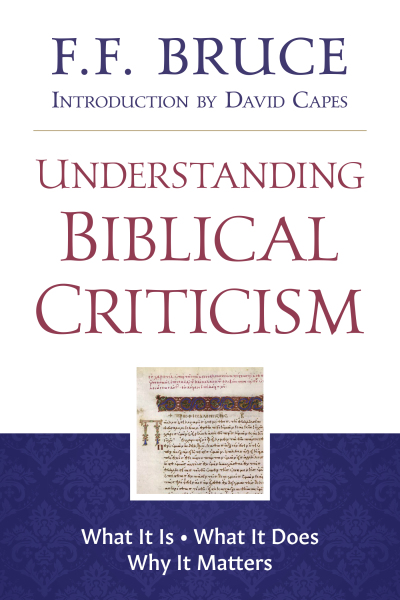 The term "biblical criticism" simply means discerning the most accurate text of the Bible ("textual criticism") and then exploring issues such as who wrote the various books of the Bible, when they were written, and the circumstances of the writing ("higher criticism").

Yet because the word "criticism" can imply fault-finding, and because some prominent biblical critics come to their study with a skepticism of the historical value of the Bible, biblical criticism often stirs up suspicion or even hostility. F.F. Bruce assures us that we don't have to be afraid of biblical criticism — textual, higher, source, form, or other approaches. Instead, he says, biblical criticism "can serve to confirm the validity of the Gospel record." He explains and demonstrates biblical criticism "in non-technical language," says biographer Tim Grass.

"The essays in this book are clearly and concisely written," says Dr. David Capes. "They demonstrate a deep knowledge of the subject, and they flow from an even deeper and abiding commitment to Christ and faith."