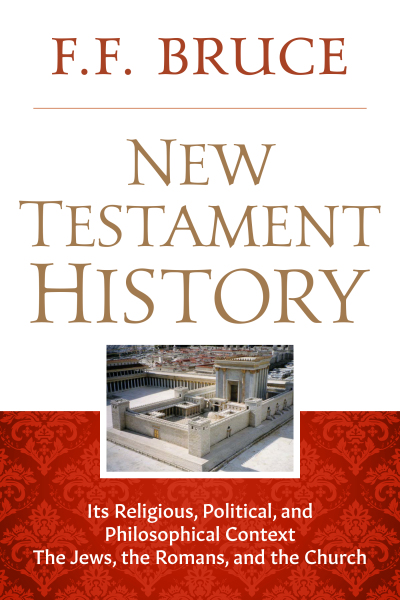 The story of the New Testament is best understood when it is set in its historical context, which is what F.F. Bruce does brilliantly in this book. He begins by explaining the political, social, intellectual, and religious aspects of the Jewish people after their return from exile. The life and ministry of Jesus is then set within that culture.

After the crucifixion of Jesus, "none of the authorities...could have reckoned with the event that confounded all their calculations," says Bruce— "Jesus' rising from the dead and appearing to his disciples...It took [his followers] quite by surprise. But it transformed them from a crowd of demoralized and frightened people into a band of men with a mission and purpose which, without delay, they proceeded to translate into action."

The second half of New Testament History is given to the actions of the followers of Jesus— the story of the early church, and the expansion of Christianity throughout the Roman Empire.

Bruce's details make the story come alive. For instance, in the New Testament Pilate is mentioned, condemns Jesus to death, and disappears from the story. Bruce, however, quotes Philo as describing Pilate as "naturally inflexible, a blend of self-will and relentlessness" and then Professor Bruce paints a fuller picture of the prefect of Judaea through additional stories and details about the man.

An "excellent clear summary, situating the New Testament in its historical context," says one reviewer. "Bruce is restrained in his judgments, judicious in his acceptance or rejection of harmonizations, and writes well. Jewish religious parties and sects are clearly explained, the various Herods get their due, and the uneasy relationship between Rome and Christianity is helpfully explored."