Contending for Our All: Defending Truth and Treasuring Christ in the Lives of Athanasius, John Owen, and J. Gresham Machen - Olive Tree Bible Software

Contending for Our All: Defending Truth and Treasuring Christ in the Lives of Athanasius, John Owen, and J. Gresham Machen 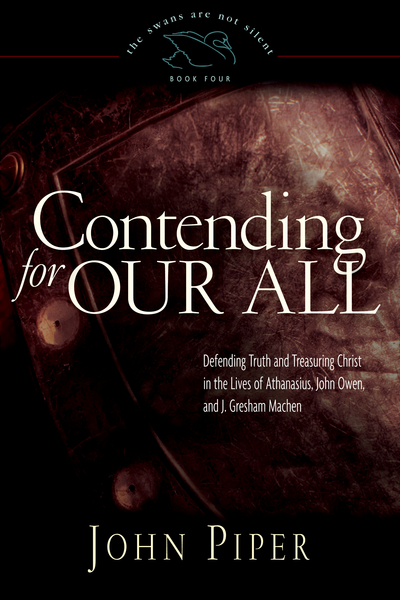 Contending for Our All: Defending Truth and Treasuring Christ in the Lives of Athanasius, John Owen, and J. Gresham Machen

Title: Contending for Our All: Defending Truth and Treasuring Christ in the Lives of Athanasius, John Owen, and J. Gresham Machen

Each of these men stood for the truth of God's Word in the face of opposition-all out of a deep love for Christ and a desire for people to know God in his fullness. Popularity was not a concern, and they took no joy in controversy for argument's sake. However, these men were willing to suffer for the sake of guarding the sanctity of the gospel. Many threats, years of exile, deaths of loved ones, opposition from friends and authorities, sickness and pain-none of these setbacks could keep these three from maintaining their efforts for the furthering of Christ's Kingdom or quench their zeal for Christ himself.

In his fourth book of The Swans Are Not Silent series, Contending for Our All, John Piper has given us biographies of Athanasius, John Owen, and J. Gresham Machen-bishop, pastor, and seminary founder. In the life of each one, personal holiness was emphasized publicly and privately despite suffering. They were true soldiers for the sake of the cross, and each man offers life lessons for Christians today.

The deity of Christ and all its worth consumed Athanasius. He devoted his life to defending it. The great adversary was the Arian heresy. Athanasius would be banished by the emperor five times. He was contending for his all-the essential, life-giving truth of Christ and his gospel.

Communion with Christ was the focus of John Owen's vast intellect and expansive heart. He battled Christ-belittling errors of the mind and heart with passion and skill. Going deeper in the understanding of Christ was for him the key to going deeper in fellowship with him.

Representing Christ in all his fullness with all of Scripture drove J. Gresham Machen. He saw in the liberal Christianity of the early twentieth century another religion. His exposure of its subtleties and his emphasis on the facts of history are astonishingly relevant for our time in the early twenty-first century.

The Swans Are Not Silent

When Augustine handed over the leadership of his church in A.D. 426, his successor was so overwhelmed by a sense of inadequacy that he declared, "The swan is silent," fearing the spiritual giant's voice would be lost to time. But for 1,600 years Augustine has not been silent-and neither have those who faithfully trumpeted the cause of Christ after him. Their lives have inspired every generation of believers and should compel us to a greater passion for God.

Part of the The Swans Are Not Silent series.