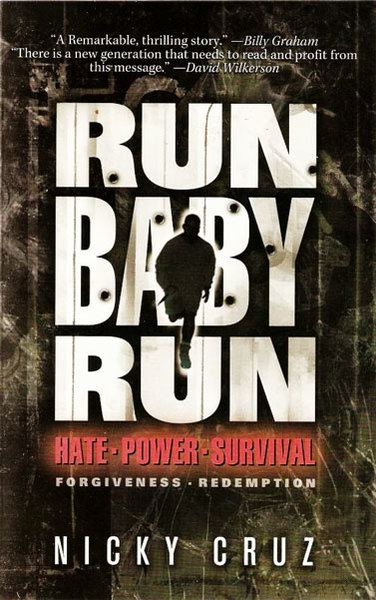 Nicky Cruz's powerful story of redemption, salvation and transformation is a powerful testament to the glorious transformative power of the Gospel of Jesus Christ. In Run, Baby, Run, Nicky Cruz tells his story. A vicious fighter, criminal, drug user, drunkard, and thief, he was the leader of one of New York City's most violent gangs, the Mau Maus. But all that changed when he met David Wilkerson, author of The Cross and the Switchblade, who refused to give up on Nicky Cruz. When he finally met Jesus and accepted Him as his Savior, Nicky Cruz left his old violent life and the gang he owned to start a ministry that impacts young people today. His story proves that no sinner is too lost for God.

"The story of Nicky Cruz is remarkable. It has all the elements of tragedy, violence, and intrigue - plus the greatest of all ingredients: the power of the Gospel of Jesus Christ." - Billy Graham

Nicky Cruz was saved from a violent life as the feared and ferocious leader of the Mau Maus, a Peurto Rican gang in New York City, because he found Jesus. His ministry with young people has impacted many youths, and he continues to minister to their needs. His autobiography Run, Baby, Run has sold over two million copies.