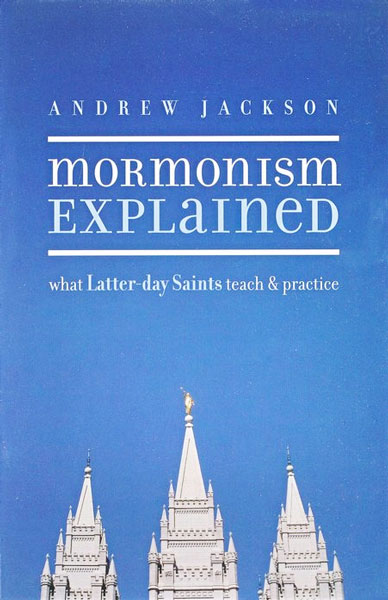 Sociologist Rodney Stark estimates that by 2080, Mormonism will have 267 million adherents. As a leading rival to biblical Christianity in both America and Latin America, it is a religion to be reckoned with. However, Mormons are not so much a group to be feared by Christians, says author Andrew Jackson, as a mission field to be cultivated.

As a professor and a pastor in a city that boasts a large LDS community, Jackson has had not only many discussions with Mormon neighbors but with current and ex-members from every level of the church hierarchy. These conversations have led him to study this religion and write Mormonism Explained: What Latter-day Saints Teach and Practice.

His systematic, concise, and well-documented work offers an easy-reading explanation of Mormon teaching and practice today. This book is the first place readers will want to turn for a primer on Mormonism’s origins and specific doctrines, and what Mormons believe and why.

“Mormonism Explained lays out clearly what Mormons believe. Chapters on Mormon history are especially enlightening. Jackson shows how Mormonism diverges from orthodox Christianity in key matters of theology, but his tone is that of a careful teacher who seeks to explain rather than merely to debunk.” — Mark D. Roberts, Senior Director and Scholar-in-Residence, Laity Lodge; author of Can We Trust the Gospels?

“The Church of Jesus Christ of Latter-day Saints is a rapidly growing, international religious movement whose leadership allows for more diversity of thought than many outsiders realize. Jackson is aware of these obstacles, has worked hard to overcome them, and has succeeded admirably.” — Craig L. Blomberg, Distinguished Professor of New Testament, Denver Seminary

“With Mormonism ever more in the mainstream and with much confusion as to what it really teaches, this is a valuable, accessible, and timely contribution.” — Tim Challies, author of The Discipline of Spiritual Discernment

“One of the most comprehensive handbooks on the Latter-day Saints in print today. Highly recommended.” — Michael S. Moore, Adjunct Professor of Old Testament, Fuller Theological Seminary

Andrew Jackson (MDiv, Fuller Theological Seminary; DMin, Gordon-Conwell Theological Seminary) is a seminary professor and an ordained minister in the Evangelical Presbyterian Church. He has traveled to the original homelands of all the primary religions of the world, taught world religions on the college level, and is a frequent blogger and author.