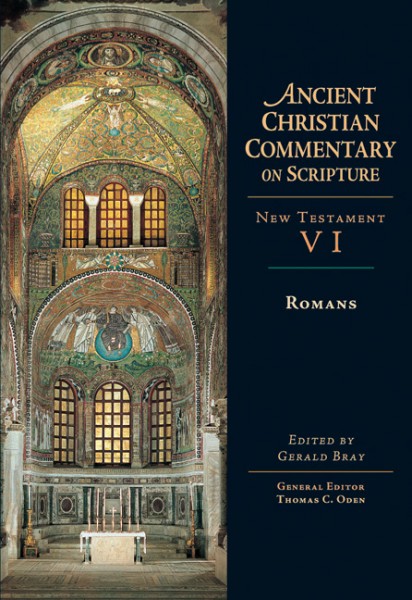 About the Romans volume:

A Christianity Today 1999 Book of the Year!

St. Paul's Letter to the Romans has long been considered the theological high-water mark of the New Testament. It was no less regarded by the ancient church, and patristic interpreters have left us an abundance of valuable comment on Romans.

This Ancient Christian Commentary on Romans collects the best and most representative of patristic commentary and homily on Romans, and it brings to the public some valuable material that has hitherto been unavailable in English translation.

Outstanding among these commentators is "Ambrosiaster," the name given to the unknown Latin commentator of the late fourth century, whose enduring worth is evident to all who read him. And the extensive commentary by Origen, largely inaccessible to modern readers, is frequently and extensively presented here in English for the first time. These commentators are joined by great figures such as John Chrysostom of Constantinople, Theodore of Mopsuestia, Augustine of Hippo, Theodoret of Cyrus, and several lesser commentators such as Diodore of Tarsus and Didymus the Blind of Alexandria.

This commentary on Romans (now in its second edition) provides a rare opportunity to encounter the familiar Pauline exposition of the righteousness of God as it echoes in the great Christian minds and communities of the early church.