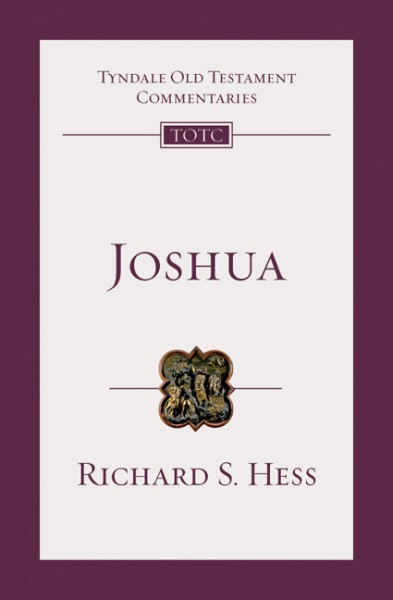 The book of Joshua memorializes a transitional episode in Israel's national history. The heroic figure Joshua, imbued with strength, courage and faith, leads the new generation of Israel across the Jordan and into the land of promise, conquering Canaanites and overseeing the allotment of the inheritance among the tribes.

But the book of Joshua is foremost a story of God, who works powerfully on behalf of Israel and Joshua, fulfilling his covenant promises. It is God who leads Israel across the Jordan, God who defeats Israel's enemies and God who presides over the apportionment of the land. And so in the final chapter it is God who receives Israel's worshipful recommitment at Shechem.

In this Tyndale Old Testament Commentary, Richard S. Hess explores these historical, theological and literary dimensions of the book of Joshua. An exceptional feature of his commentary is his careful consideration of the allocation of the Promised Land and the boundary lists the book of Joshua so prominently displays. And in a day when grave doubts have been raised over the historicity of the "conquest" story, Hess presents historical and archaeological evidence for placing the events of Joshua in the late second millennium B.C.

"There simply is no series of medium-length commentaries that approaches the excellence of the Tyndale commentaries." — Donald A. Hagner, Fuller Theological Seminary Richard S. Hess is professor of Old Testament and Semitic languages at Denver Seminary. Formerly he taught at Roehampton Institute in London. He earned his PhD in West Semitic Languages and Literature at Hebrew Union College in Cincinnati, Ohio, and he has done postdoctoral study at the University of Chicago, the University of Cambridge, the Albright Institute of Archaeological Research in Jerusalem, the University of Sheffield, and the University of Münster. He is the author of Armana Personal Names, Studies in the Personal Names of Genesis 1-11, and a commentary on Song of Songs (Baker Commentary on the Old Testament Wisdom and Psalms), as well as research articles, dictionary entries, and book reviews. Hess serves as editor of the Bulletin for Biblical Research.
ISBN: 9780830842063