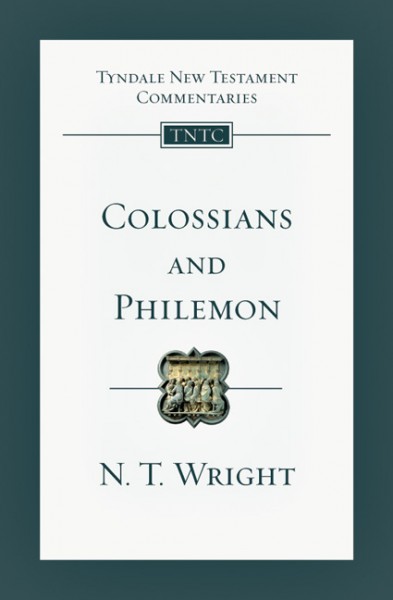 Colossians presents a picture of Christ who is 'the firstborn over all creation' and has disarmed and triumphed over the powers and authorities. The letter also appeals to its readers to seek humble maturity, a maturity not possible apart from the person and work of Jesus Christ.

N. T Wright's stated goal is to "give the text back to the reader uncluttered by a mass of glosses." In Philemon, Paul makes a personal appeal to a fellow believer to receive a runaway slave, Onesimus, in love and forgiveness. For Wright, it is "an acted parable of the gospel itself."

The Tyndale New Testament Commentaries have long been a trusted resource for Bible study. Written by some of the world's most distinguished evangelical scholars, these twenty volumes offer clear, reliable, and relevant explanations of every book in the New Testament.

These Tyndale volumes are designed to help readers understand what the Bible actually says and what it means. The introduction to each volume gives a concise but thorough description of the authorship, date, and historical background of the biblical book under consideration. The commentary itself examines the text section by section, drawing out its main themes. It also comments on individual verses and deals with problems of interpretation. The aim throughout is to get at the true meaning of the Bible and to make its message plain to readers today.

"There simply is no series of medium-length commentaries that approaches the excellence of the Tyndale commentaries." — Donald A. Hagner, Fuller Theological Seminary A prolific writer of both scholarly and popular books, N. T. Wright has written over thirty books, including Simply Christian, The Original Jesus, What Saint Paul Really Said, The Challenge of Jesus, The Meaning of Jesus, Jesus and the Victory of God, and the magisterial Paul and the Faithfulness of God. His N. T. Wright For Everyone Series includes commentaries covering the entire New Testament. Formerly bishop of Durham in England, Wright is research professor of New Testament and early Christianity at the University of St Andrews in Scotland. He was formerly canon theologian of Westminster Abbey and dean of Lichfield Cathedral. He also taught New Testament studies for twenty years at Cambridge, McGill, and Oxford Universities. He has been a visiting professor at Harvard Divinity School, Hebrew University in Jerusalem, Gregorian University in Rome, and many other institutions around the world. In addition to his many books, Wright reaches a broad audience through his frequent media appearances. A sought-after commentator, Wright writes frequently for newspapers in England, including the Times, the Independent, and the Guardian. He has been interviewed numerous times by radio and television broadcasters on both sides of the Atlantic, including ABC, NBC, CNN, PBS, and NPR.
ISBN: 9780830842421