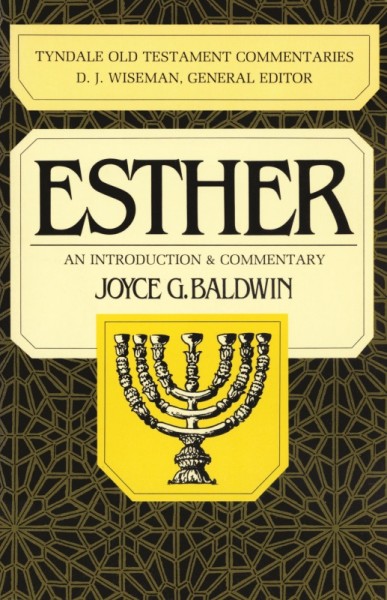 The Jews were threatened with genocide. A decree ordered the extermination of young and old, women and children. The place: Persia. The time: fifth century B.C. The book of Esther describes how this crisis was averted through the bravery of Esther, the wisdom of her stepfather and the unity of the Jewish people. It also reveals the God who quietly--and sometimes unexpectedly--works behind the scenes to order the events of our lives.

This original edition of the Tyndale Commentary on Esther by Joyce Baldwin, draws out the beauty and power of this book by discussing its background, structure and theology, and by providing a passage-by-passage analysis of its contents.

The Tyndale Old Testament Commentaries have long been a trusted resource for Bible study. The introduction to each volume gives a concise but thorough description of the authorship, date and historical background of the biblical book under consideration. The commentary itself examines the text section by section, drawing out its main themes. It also comments on individual verses and deals with problems of interpretation. Written by some of the world's most distinguished evangelical scholars, these volumes retain their original text now retypeset in a larger format. As always, they continue to aim at the true meaning of the Bible and to make its message plain to readers today.

"There simply is no series of medium-length commentaries that approaches the excellence of the Tyndale commentaries." — Donald A. Hagner, Fuller Theological Seminary Joyce G. Baldwin (B.A., B.D.) was principal of Trinity College, Bristol, and wrote several volumes in the Tyndale Old Testament Commentary series. She passed away in 1996.