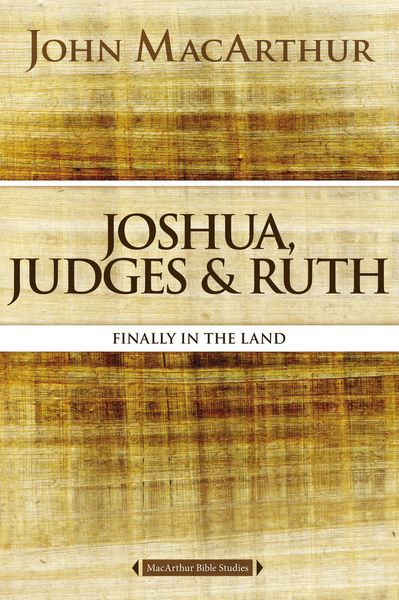 This title will be available soon.
Sorry we do not yet have a release date.
Add to Wish List

It took more than forty years of wandering, but finally the nation of Israel was ready to enter the land that God had promised to them. However, they knew that arriving at the borders was just the beginning, for many battles and many foes still lay ahead. Yet, as Joshua reminded them, they also knew that the Lord had promised to fight all their battles and defeat their foes—through His power, and not their own.

In this study, John MacArthur guides readers through an in-depth look at the Israelites’ conquest of the Promised Land, beginning with the miraculous parting of the Jordan River, continuing through the victories and setbacks as the people settled into Canaan, and concluding with the time of the judges. Studies include close-up examinations of Rahab, Ruth, and Samson, as well as careful considerations of doctrinal themes such as “The Sin of Achan” and the role of “The Kinsman Redeemer.”

The MacArthur Bible Studies provide intriguing examinations of the whole of Scripture. Each guide incorporates extensive commentary, detailed observations on overriding themes, and probing questions to help you study the Word of God with guidance from John MacArthur.

This volume is available for purchase individually, or as part of the MacArthur Bible Studies Collection.

John MacArthur is the pastor of Grace Community Church in Sun Valley, California, as well as an author and conference speaker. John graduated from Talbot Theological Seminar and came to Grace Community Church in 1969. In 1985, John became president of The Master’s University. In 1986, John founded The Master’s Seminary, a graduate school dedicated to training men for full-time pastoral and missionary work. John has written hundreds of study guides and books, including the MacArthur Study Bible and MacArthur New Testament Commentary. John and his wife, Patricia, live in Southern California and have four married children and fifteen grandchildren.