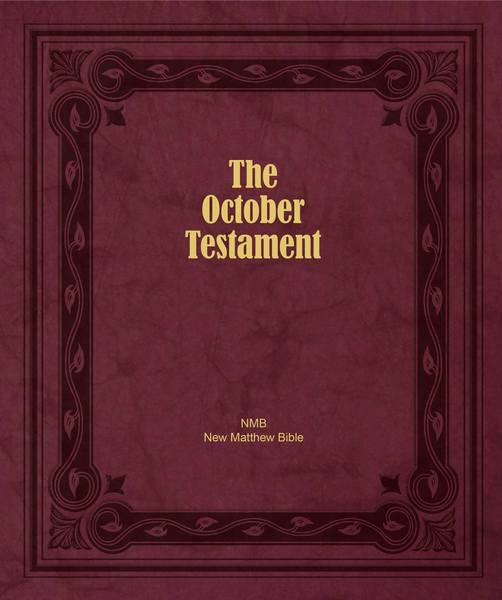 The New Matthew Bible (NMB) is a gentle update of a little-known but important Reformation Bible, the Matthew Bible. It is not a new translation. The chief editor is Ruth Magnusson Davis, a scholar of Early Modern English, who founded the New Matthew Bible Project in 2009. The NMB New Testament was published in 2016 under the name "The October Testament." Work on the Old Testament is ongoing.

The Matthew Bible, also known as Matthew's Version, was published in 1537 by John Rogers under the pseudonym "Thomas Matthew." It contained the New Testament translated by William Tyndale, and as much of the Old Testament as he completed before he was captured and executed. The balance of the Old Testament and the Apocrypha were Myles Coverdale's translations, chiefly from German sources, except that Rogers translated the Prayer of Mannaseh. Henry VIII licensed the Matthew Bible for use in England.

After Queen Mary came to the throne, she sought out the men who had been involved in the publication of the English Bible. Rogers was captured, and in 1555 became Mary's first burning victim; thus he and William Tyndale sealed their work with their blood. The Matthew Bible is the only English Bible bought with blood.

Few are aware that the Matthew Bible formed the base of the Great Bible and King James Version, but people will recognize the familiar language. Davis, working from an original, rag-paper 1549 reprint, has guarded the historic language, with careful attention to grammar and linguistics in order to make it understandable for today.

Davis has also written the world’s only history of Matthew's Version, entitled "The Story of the Matthew Bible," in two volumes.

More about the New Matthew Bible project, is at:
https://baruchhousepublishing.com
http://newmatthewbible.org