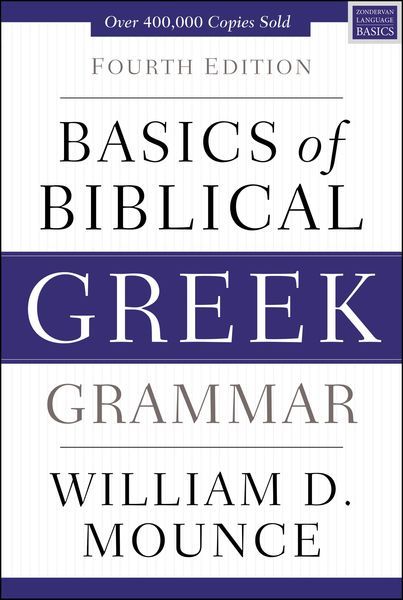 Clear. Understandable. Carefully organized. Basics of Biblical Greek Grammar by William D. Mounce is the standard textbook for colleges and seminaries. Since its initial publication in 1993 its integrated approach has helped more than 250,000 students learn New Testament Greek.

The fourth edition of Basics of Biblical Greek Grammar has been updated throughout based on continuing feedback from professors, students, self-learners, and homeschoolers, making it even more effective for today’s students. Improvements have been made based on recent developments in scholarship as well.

The key to the effectiveness of Basics of Biblical Greek Grammar in helping students learn is in how it introduces them to the language. Students learn about the features of the Greek language in a logical order, with each lesson building upon the one before it. Unnecessary obstacles that discourage students and hinder progress are removed, such as rote memorization of endless verbal paradigms. Instead students receive encouragement along the way to assure them they are making the necessary progress. Detailed discussions are included at key junctures to help students grasp important concepts are also provided.

By the time students have worked their way through Basics of Biblical Greek Grammar they will have learned:

"As a linguist and former Wycliffe translator, Mounce’s Basics of Biblical Greek has been my preferred textbook for 15 years, both in the classroom and online. His systemic, morphological approach helps students visualize important elements that parts of speech share, instead of merely struggle with how they differ. Consequently, he has somewhat reduced rote memory work. His (optional) separation of the noun system from the verb system reduces confusion on key endings. His workbook is equally impressive, quickly engaging and motivating students with translating actual Bible verses---even some of the LXX and the Fathers. I highly recommend it!" — (3rd Edition) Joel Harlow, Gordon-Conwell Theological Seminary

"One factor that makes Basics of Biblical Greek a superior textbook for teaching the elements of Greek is the additional resources that are available to accompany the textbook. I have found that for students learning Greek for the first time the companion resources become essential tools for learning. Additional resources such as the workbook, vocabulary cards, pronunciation assistance, laminated study guide, and free mini-lectures by Bill Mounce---just to name a few---support what I am doing in the classroom." — (3rd Edition) Joel Willitts, North Park University William D Mounce (PhD, Aberdeen University) lives as a writer in Washougal, Washington. He is the President of BiblicalTraining.org, a non-profit organization offering world-class educational resources for discipleship in the local church. See www.BillMounce.com for more information. Formerly he was a preaching pastor, and prior to that a professor of New Testament and director of the Greek Program at Gordon-Conwell Theological Seminary. He is the author of the bestselling Greek textbook, Basics of Biblical Greek, and many other resources. He was the New Testament chair of the English Standard Version translation of the Bible, and is serving on the NIV translation committee.