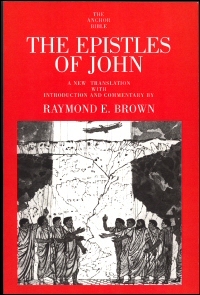 With this study—companion to the masterful two-volume The Gospel According to John, Raymond E. Brown completed his trilogy on the Johannine corpus. Meticulous in detail, exhaustive in analysis, persuasive in argument, it examines controversies that have long troubled both biblical scholars and lay readers. Questions of authorship, composition, and dating, as well as the debate over source theories, are discussed at length; but these are kept subordinate to the overall question of meaning.

What gives this commentary special interest and excitement is the bold, imaginative reconstruction of the setting of the Johannine work—in particular of the “opposition figures,” who are only dimly sketched in the Epistles—so that we see clearly that the author is writing to his flock both about the dangers and difficulties confronting them, and about the eternal life that is theirs by the gift of God. In this way, the Epistles of John become intelligible as broadsides in a critical engagement between the forces of light and darkness.

In addition to his superb textual analysis of the letters, Raymond Brown has brought to life the community in which these works were formed and shaped. We are forcefully reminded that the Gospel and the Epistles were addressed to very real people living in the first century a.d., people with religious problems not unlike our own. In all respects, The Epistles of John stands out as a model of biblical scholarship and study.

Over his illustrious career, the late Raymond E. Brown, S.S., Ph.D., was internationally regarded as a dean of New Testament scholars. He was Auburn Distinguished Professor Emeritus of Biblical Studies at Union Theological Seminary in New York City. Among his more than thirty-five books on the Bible are three volumes in the i>Anchor Bible Series, as well as the Anchor Bible Reference Library volumes The Birth of the Messiah, The Death of the Messiah, and An Introduction to the New Testament, winner of the 1998 Catholic Press Association Award for Biblical Studies.