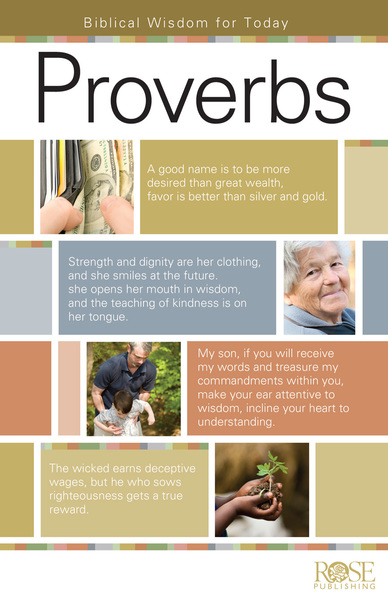 Proverbs is one of the most beloved books in the Bible and this full-color pamphlet gives you a good overview and includes discussion questions for personal or group use. It explains the types of proverbs and shows the richness hidden below the surface when you understand the their structure and meaning.

What's Included in the Proverbs pamphlet?

Benjamin Galán, MTS, ThM, the award-winning author of The Rose Book of Bible Prophecies, was the author of the Rose Guide to the Tabernacle, which won the 2009 Christian Retailers' Choice Award in Bible Reference. He is Adjunct Professor of Hebrew and Old Testament Literature at Fuller Theological Seminary.

Benjamin Galán grew up in a Christian home in Mexico City. During his studies, Galán became enamored with natural sciences. In college, Galen studied physics and mathematics, and grew indifferent and hostile toward the Christian faith. Along with the French mathematician Laplace, Galan believed God was no longer a necessary hypothesis.

After additional studies, Galán began to long for deep, satisfying connections and meaning in his young life. Through the moving testimony of a friend in school, Galán began to read the Bible with renewed eyes, and eventually returned to church. As he became more involved in the ministry of his home church, Galán sensed God's calling.