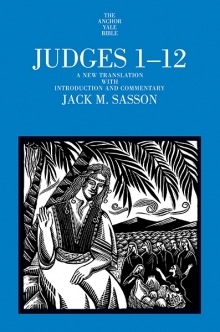 Profound changes have occurred in the study of early Israel over the past four decades. In recent years, the pendulum of scholarship has swung toward literary and theological readings that are not significantly informed by the literature of the ancient Near East. Jack M. Sasson’s commentary to the first twelve chapters of the book of Judges is a refreshing corrective to that trend. It aims to expand comprehension of the Hebrew text by explaining its meaning, exploring its contexts, and charting its effect over time. Addressed are issues about the techniques that advance the text’s objectives, the impulses behind its composition, the motivations behind its preservation, the diversity of interpretations during its transmission in several ancient languages, and the learned attention it has gathered over time in faith traditions, Jewish, Christian, and Muslim. In its pages also is a fair sampling from ancient Near Eastern documents to illumine specific biblical passages or to bolster the interpretation of contexts. The result is a Judges that more carefully reflects the culture that produced it.

In presenting this fresh translation of the Masoretic text of Judges as received in our days, Sasson does not shy away from citing variant or divergent readings in the few Judges fragments and readily calls on testimonies from diverse Greek, Aramaic, and Latin renderings. The opinions of Jewish, Christian, and Muslim sages are reviewed, as are those of eminent scholars of recent times. With his Introductory Remarks, Notes, and Comments, Sasson addresses specific issues of religious, social, cultural, and historical significance and turns to ancient Near Eastern lore to illustrate how specific actions and events unfolded elsewhere under comparable circumstances. This impressive new appreciation of Judges will be of immense interest to bible specialists, theologians, cultural historians, and students of the ancient world.

The Anchor Yale Bible is committed to producing commentaries in the tradition established half a century ago by the founders of the series, William Foxwell Albright and David Noel Freedman. It aims to present the best contemporary scholarship in a way that is accessible not only to scholars but also to the educated nonspecialist. Its approach is grounded in exact translation of the ancient languages and an appreciation of the historical and cultural context in which the biblical books were written supplemented by insights from modern methods, such as sociological and literary criticism. Jack M. Sasson, the Mary Jane Werthan Professor of Jewish Studies and Hebrew Bible at Vanderbilt University, lives in Nashville, TN. He is past president of the American Oriental Society and the International Association for Assyriology.