The Yes Effect: Accepting God's Invitation to Transform the World Around You - Olive Tree Bible Software 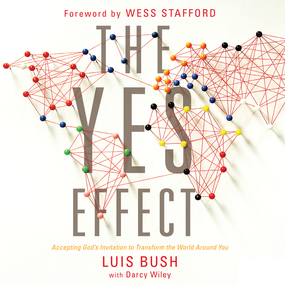 Title: The Yes Effect: Accepting God's Invitation to Transform the World Around You

From the missions strategist behind ‘The 10/40 Window’
In 1990, Luis Bush helped change modern missions by introducing the concept of the 10/40 window, a geographic region where large, dense populations of people suffered severe poverty and limited access to the gospel—essentially shining a light on the world’s greatest need.
Now, after decades spent serving in global missions mobilization, Luis has a unique perspective on what God is doing around the world. Though statistics and maps can be a great place to start, The Yes Effect reveals that true transformation begins when we restart our hearts—getting in sync with God’s tenderness toward the oppressed and regaining compassion for the lost.
In The Yes Effect, Dr. Bush shares his own story as well as inspiring stories of individuals and organizations around the world whose acts of love and justice are bringing hope and transformation in places of misery and immobility.
From the orphans weeping in Bihar, India, to garbage collectors in Cairo, Egypt—from the single mom trying to find a way to feed her family as a Syrian refugee, to the Church cowering under government control—God is at work in surprising places. And this transformation is sparked when ordinary people say yes to God, igniting an ongoing global chain reaction that sees glimpses God’s kingdom springing up all over the world.
Ultimately, The Yes Effect will give you an encouraging window into worldwide efforts to spread the gospel, and it will inspire you to give God your “yes”—and like so many others before you, become part of God’s global story of transformation.
ISBN: 9781621887393