We Died Before We Came Here: A True Story of Sacrifice and Hope - Olive Tree Bible Software

We Died Before We Came Here: A True Story of Sacrifice and Hope 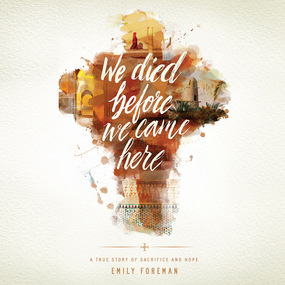 We Died Before We Came Here: A True Story of Sacrifice and Hope

Title: We Died Before We Came Here: A True Story of Sacrifice and Hope

"In this life, I have lost. I lost my husband and best friend. My children lost their father. But Stephen didn't lose his life. He found it."

Early one morning, just down the street from the local mosque, gunshots shattered the silence. A
young American lay in a pool of blood, murdered by al-Qaeda extremists.

When God called Emily and Stephen Foreman to bring the gospel to a Muslim nation where Christianity was illegal, they knew they were being called to a life of sacrifice. “We died before be came here” was their common refrain.

Emily, left with four children and an undying calling to reach the Muslim world, recounts in this memoir the powerful story of God’s work through a life poured out for Christ. Stephen Foreman’s death was not the beginning, nor was it the end. And he did not die in vain. This promise echoes through the book’s pages and far beyond, in the hearts and lives of countless individuals touched by a man who lived his life as though it wasn’t his own.
ISBN: 9781621886266