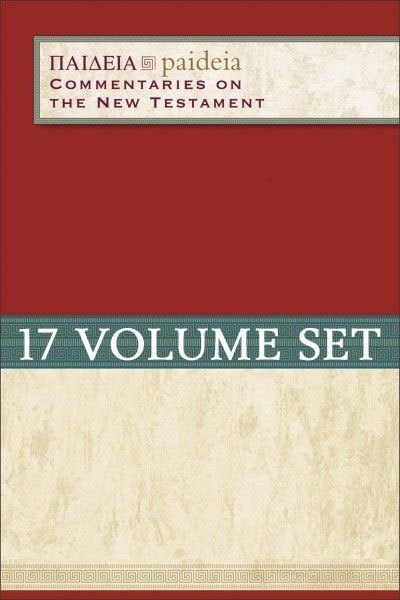 The Paideia series approaches each text in its final, canonical form, proceeding by sense units rather than word-by-word or verse-by-verse. Each sense unit is explored in three sections: (1) introductory matters, (2) tracing the train of thought, and (3) key hermeneutical and theological questions. The commentaries shed fresh light on the text while avoiding idiosyncratic readings and attend to theological meaning without presuming a specific theological stance in the reader. Aimed squarely at university and seminary students, this series is eminently useful for professors and preachers. It will also be of interest to theological libraries.

Paideia Commentaries on the New Testament proceed by sense units rather than word-by-word or verse-by-verse. This series explores how New Testament texts inform Christian readers by:

The Paideia Commentary on the New Testament includes the following titles:

"Contributors to this series comprise scholars of international reputation. . . . If successful, this series will be helpful not only for theological students but also for anyone who is interested in the final form and theological interests [of] the New Testament. It may also prove to be useful for lay teachers and preachers in the church. While this series is aimed at students, it is hope[d] that seasoned scholars will also find this series engaging."--Kar Yong, myhomilia.blogspot.com

"The Paideia Commentary series has established itself as a solid series of concise works that focus on the final form of the biblical text, highlighting narrative flow, rhetorical devices and structure, and commenting particularly on relevant historical background and theological significance."--Craig L. Blomberg, Denver Journal

"[I] continue to be impressed by the contributors' skill in combining academic rigor with accessibility. . . . The [series] authors . . . combine historical and linguistic analysis with theological reflection, which makes these commentaries useful for those interested in bridging the gap between the ancient world and contemporary Christianity (seminarians, clergy). . . . Frequent inserts with asides [offer] additional explanations or attempts to relate ancient texts to contemporary issues."--Michael Gilmour, Catholic Biblical Quarterly

Paul J. Achtemeier (1927-2013) was Herbert Worth and Annie H. Jackson Professor of Biblical Interpretation Emeritus at Union Theological Seminary in Richmond, Virginia. He served as the president of both the Society of Biblical Literature and the Catholic Biblical Association. He authored a number of books, including 1 Peter (Hermeneia), and was the general editor for the Harper Bible Dictionary.

Francis J. Moloney, SDB (DPhil, University of Oxford), is Senior Professorial Fellow at Catholic Theological College, University of Divinity, in Melbourne, Australia. He is the former Provincial Superior of the Salesians of Don Bosco for Australia and the Pacific region and formerly taught at Australian Catholic University and the Catholic University of America. Father Moloney is a Fellow of the Australian Academy of the Humanities, a Member of the Order of Australia, and the author of more than forty books. He is also a member of the editorial board for Paideia: Commentaries on the New Testament.

Loveday Alexander is a Professor of Biblical Studies at the University of Sheffield and a Canon-Theologian of Chester Cathedral. Since training as a classicist at Somerville College, Oxford, she has been exploring the interface between the classical world and the world of the New Testament.

C. Clifton Black is the Otto A. Piper Professor of Biblical Theology at Princeton Theological Seminary. He is the author of many books in New Testament studies, including The Rhetoric of the Gospel: Theological Artistry in the Gospels and Acts, 2nd ed., published by Westminster John Knox Press (2013).

Susan R. Garrett is Professor of New Testament at Louisville Presbyterian Theological Seminary. She joined the faculty at Louisville Seminary in 1995 and served as Chair of the Grawemeyer Award in Religion from 2001-2012, and as Dean of the Seminary from 2012-2018. Some of Dr. Garrett’s published works include The Demise of the Devil: Magic and the Demonic in Luke’s Writings, The Temptations of Jesus in Mark’s Gospel (Eerdmans, 1998), No Ordinary Angel: Celestial Spirits and Christian Claims about Jesus (Yale University Press, 2008). Garrett also serves as a Bible consultant for Oxford University Press.

Upgrade Pricing Available! If you've previously purchased a qualifying product, you can purchase this item for a special upgrade price. The upgrade price will be visible when you log in to your Olive Tree account and add the item to your cart (NOTE: Upgrade pricing is only available on www.olivetree.com, and not via in-app purchase).