Terrible Speed of Mercy: A Spiritual Biography of Flannery O'Connor 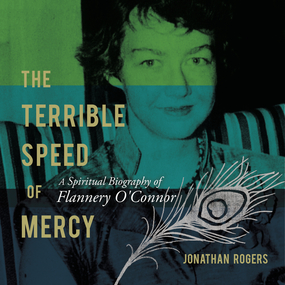 Terrible Speed of Mercy: A Spiritual Biography of Flannery O'Connor

“Many of my ardent admirers would be roundly shocked and disturbed if they realized that everything I believe is thoroughly moral, thoroughly Catholic, and that it is these beliefs that give my work its chief characteristics.”

Flannery O’Connor’s work has been described as “profane, blasphemous, and outrageous.” Her stories are peopled by a sordid caravan of murderers and thieves, prostitutes and bigots whose lives are punctuated by horror and sudden violence. But perhaps the most shocking thing about Flannery O’Connor’s fiction is the fact that it is shaped by a thoroughly Christian vision. If the world she depicts is dark and terrifying, it is also the place where grace makes itself known. Her world—our world—is the stage whereon the divine comedy plays out; the freakishness and violence in O’Connor’s stories, so often mistaken for a kind of misanthropy or even nihilism, turn out to be a call to mercy.

In this biography, Jonathan Rogers gets at the heart of O’Connor’s work. He follows the roots of her fervent Catholicism and traces the outlines of a life marked by illness and suffering, but ultimately defined by an irrepressible joy and even hilarity. In her stories, and in her life story, Flannery O’Connor extends a hand in the dark, warning and reassuring us of the terrible speed of mercy.