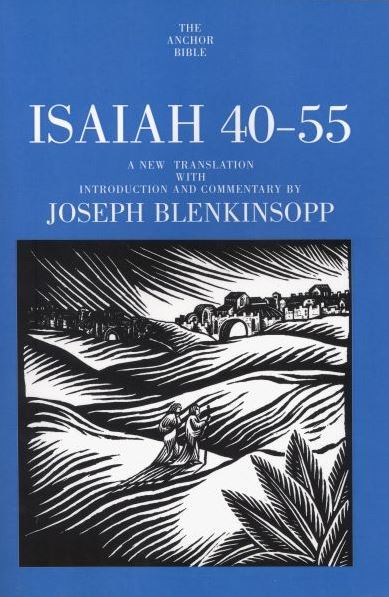 Scholars have traditionally isolated three distinct sections of what is known as the Book of Isaiah, and in Isaiah 40-55, distinguished biblical scholar Joseph Blenkinsopp provides a new translation and critical commentary on the section usually referred to as Second or Deutero Isaiah. The second volume in a three-volume commentary, it easily maintains the high standards of academic excellence established by Isaiah 1-39.

Second Isaiah was written in the sixth century b.c.e., in the years just before the fall of the mighty Babylonian Empire, by an anonymous prophet whom history has erroneously identified with the real Isaiah (born ca. 765 b.c.e.). Scholars know Second Isaiah was written by someone other than Isaiah because the contexts of these prophecies are so very different. When Second Isaiah was written, the prophet believed that Israel's time of suffering was drawing to a close. There was, he insisted, a new age upon them, a time of hope, peace, and renewed national prosperity. The main thrust of the prophet's argument was intended to rally the spirits of a people devastated by war and conquest. One of the most famous examples of this optimistic tone is the well-known and beloved Song of the Suffering Servant, which is found in Chapters 52-53, and about which Blenkinsopp has some challenging new ideas.

The final chapters of Second Isaiah, however, are in an entirely different key as it becomes clear that the new world the prophet foresaw earlier was not going to come to pass. This despair finds its most poignant expression in the final section of the Book of Isaiah, which Blenkinsopp will address in his forthcoming third volume.

Joseph Blenkinsopp is currently the John A. O’Brien Professor Emeritus of Biblical Studies at the University of Notre Dame, where he has taught since 1970. Among his many scholarly publications on the Hebrew Bible is the Anchor Bible Reference Library volumes The Pentateuch and Isaiah 1-39.