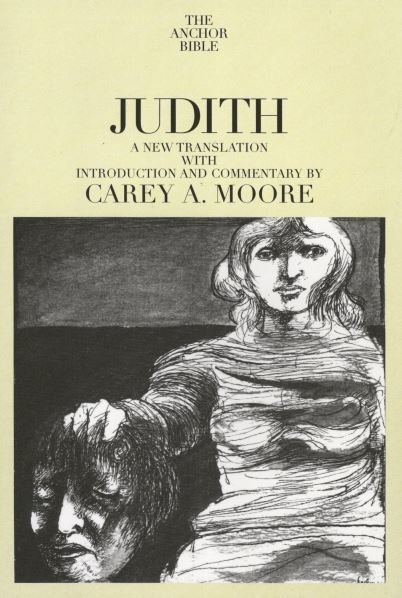 Judith is Volume 40 in the acclaimed Anchor Bible series of new book-by-book translations of the Old and New Testaments and Apocrypha. In the Apocrypha, Judith is the saint who murdered for her people. She offered herself to Holofernes, the Assyrian general sent by Nebuchadnezzar to destroy the Israelites. After she had charmed Holofernes with flattery and drink, Judith chopped of his head while he lay in a drunken stupor, thereby leaving his troops “headless” and in a state of total panic and confusion. Her victory was celebrated in song and brought peace to her land for years to come.

In his illuminating new translation and commentary, Carey A. Moore considers the historicity of the story and explores the author’s true intent: Was it to describe actual events or to compose a fictitious story of other purposes? Was his concern more historical or theological?

The story of Judith abounds in ironies. There is Judith, the beautiful woman who lived a stark, celibate existence after her husband’s death had left her a wealthy widow. Born into a sexist society with rigidly defined roles, Judith better “played the man” than did any of her male compatriots. There is Holofernes, the Assyrian conqueror, unable to defeat a small Israelite village after dozens of countries had fallen under his sword. Intent on seducing Judith, Holofernes instead lost his head to her. Perhaps the ultimate irony of all is the story of Judith itself: the timeless tale of a deeply religious woman who became revered not for her poverty but for an act of murder.

Dr. Moore’s study of the canonicity of Judith brings perspective to the story’s varied acceptance among both Jews and Christians. It also notes the similarity between this work and the equally popular story of Esther; each woman, through different means, served her people through acts of bravery.

The photographs and maps illustrating Judith include depictions of the story of Judith by such masters as Machiavelli, Botticelli, Caravaggio, and Donatello.

Carey A. Moore is chairman of the Department of Religion at Gettysburg College, Gettysburg, Pennsylvania. For the Anchor Bible series, he has written Esther; Daniel, Esther, and Jeremiah: The Additions; and Tobit.