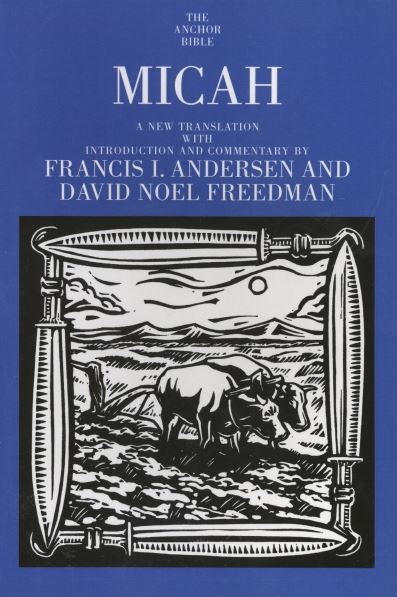 One of the twelve Minor Prophets, Micah unwaveringly spoke God’s message to Israel—a message filled with judgment but also laced with the promise of redemption. Micah combined poetic complexity and literary sophistication to compel his audience to respond. And now, through an exacting linguistic and literary analysis of the biblical text, coauthors Francis I. Andersen and David Noel Freedman explain what Micah meant to his contemporaries, as well as what his message means to readers today.

What sets Micah apart is the attention it pays to the details of the prophet’s original text. The commentary is descriptive rather than speculative, philological rather than theological. With unusual care, the authors—two of the world’s leading Bible scholars—examine the features of Micah’s biblical Hebrew and prophetic discourse. They discover the use of a special kind of language, which, in its poetic composition, differs significantly from the language of classical Hebrew prose.

At the zenith of their careers, masters of all relevant disciplines, Andersen and Freedman are the perfect duo to unlock the words of this challenging prophet.

Francis I. Andersen taught the Bible in Australia, the United States, and around the world before retiring as Professorial Fellow in the Department of Classics and Archaeology at the University of Melbourne, Australia. Out of his pioneering work on the poetics and metrics of biblical texts, he has produced over seventy scholarly articles and many books. He lives with his wife, Lois, in Donvale, Victoria, Australia.

David Noel Freedman has been, since its inception, general editor and a contributing coauthor of the Anchor Bible series. He is a professor in Hebrew Bible at the University of California, San Diego, and lives in nearby La Jolla.