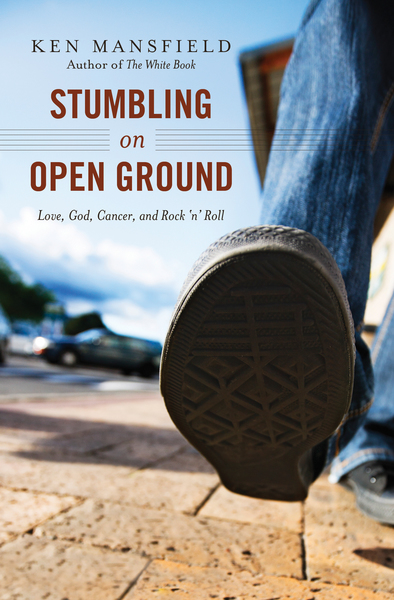 Rock and Roll, Cancer, and God’s Love Collide at the Crossroads of Doubt and Faith

Stumbling on Open Ground is a story of private trial and faith like those found in the books of Esther and Job. Punctuated with stories from Mansfield’s years in the music business—working with George Harrison and Waylon Jennings, among others—Stumbling on Open Ground is a private dialogue between a charismatic man, his loving wife, and the extraordinary God who transformed them both in the middle of a heartbreaking disease.

“Dealing with cancer is not as linear as most books describe the ordeal. Going into it, going through it, and coming out of cancer is not that orderly. The battle is more of a hanging on, a falling apart, a sense of loss, and a lot of lonely flailing among the rubble.”—Ken Mansfield

Ken’s story is told in tandem with his wife, Connie. She is the enduring comforter, a co-victim of cancer whose capacity for selfless, empathetic eros comprises the human counterpart to God’s agape. This is the consummate love story of two people on a journey with God to the edge and back.

Stumbling on Open Ground is a must-read for anyone who has ever needed strength in moments of trial and doubt.

“Ken is jarringly honest about everything—life, success, fame, disillusionment, faith, questioning faith, cancer, the death of friends, and staying very close to one’s spouse and Creator in the face of life-threatening challenges. This book might make you a little uncomfortable, but that’s probably why you should read it. We must all at some point face similar challenges, face mortality, losing everything material, and Ken talks about what it’s like to trust God, no matter what.” —Bernie Leadon, founding member of “The Eagles”

“Ken Mansfield’s Stumbling on Open Ground is one of the most extraordinary messages of healing—spiritual, physical and emotional—I have ever read. As someone who is paid to write, I’m genuinely in awe of his descriptive powers . . . and he needs them all to convey the Tolstoyan experiences of his past trials, and to describe the miraculous. Ken’s writing is truly magnificent and this is a book that will be savored and remembered forever by those lucky enough to crack it open. Thank God for keeping Ken alive to write it.” —David Asman, host of Forbes on Fox, Fox News Channel

“Ken Mansfield's harrowing journey from the pinnacle of success—on the rooftop with the Beatles for their final performance—to the depths of near death is a story both heavenly and hellish as he openly faces his God with the questions very few trust their heavenly Father enough to ask. God’s answers lie between the pages of this book.” —Mancow Muller, nationally syndicated radio and television host

“Ken has been down roads so unique that many of us only read about lives like his in novels or see them in blockbuster movies. But this time, he gets personal and strikes a chord deep in our hearts as he tackles the universal questions of ‘Why me? Why now? Will I be able to handle this? Where are you, God?’ This book is sure to inspire you, and help you to doubt your doubts, and place your faith in God.” —Kirk Cameron, actor and producer