Religion and the Rise of History - Olive Tree Bible Software

Religion and the Rise of History 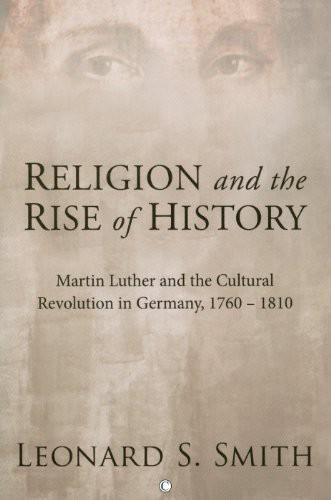 Religion and the Rise of History

Title: Religion and the Rise of History

As a historical inquiry and synthesis, this intellectual history is the first study to apply the ideal-type or model-building methodology of Otto Hintze (1861-1940) to Western historical thought or to what R. G. Collingwood called "The Idea of History," for it contains succinct and useful models for seeing and teaching classical, Christian, and modern professional historiography. Religion and the Rise of History is also the first work to suggest that, in addition to his well-known paradoxical, simul, and/or "at-the-same-time" way of thinking and viewing life, Martin Luther also held to a way that was deeply incarnational, dynamic, and/or "in-with-and-under." This dual vision and "a Lutheran ethos" strongly influenced Leibniz, Hamann, and Herder, and was therefore a matter of considerable significance for the rise of a distinctly modern form of historical consciousness (commonly called "historicism") in Protestant Germany. Smith's essay suggests a new time period for the formative age of modern German thought, culture, and education: "The Cultural Revolution in Germany." This age began in the early 1760s and culminated in 1810 with the founding of the University of Berlin, the first fully "modern" and "modernizing" university. This university first became the recognized center for the study of history, however, through the work of Leopold von Ranke (1795-1886). Here the story shows how a young Ranke derived his individualizing way of thinking and viewing life mainly from Luther, how his life-work is the best example in Western literature of the rise of history from a calling to a profession, and how the three-way discussion between Troeltsch, Meinecke, and Hintze concerning the nature of modern historical thought was of central importance for the reorientation of Western social-historical thought in the twentieth century.
ISBN: 9781621891161